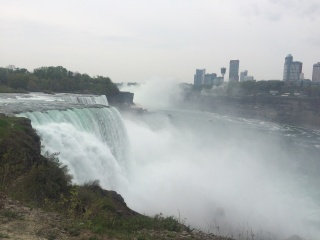 Buffalo, NY and Our first trip of 2015 to Niagara Falls
Once your children start playing hockey, you come to the realization that trips to Canada may begin in the not-so-distant future.
2015 led us to two trips up north……….the drive isn’t bad from Pittsburgh (as long as it isn’t in the winter).
Our first trip we stayed in Cheektowaga at the Hampton Inn on Walden. It was a nice, clean hotel with a swimming pool (absolute necessity when traveling with hockey teams).
My oldest son was playing on a tournament team in the spring, so we went to the tournament in May at the Harborcenter in Buffalo. This arena was the absolute nicest and most amazing hockey arena that either of my sons have ever played in. There is a Marriott in the building, restaurants, retail shops, a theater, etc. There are two ice rinks in the building.
It is right next to Canalside, which is a new area that is waterfront that has family activities and concerts. It is part of the new movement to make Buffalo a bigger tourist attraction.

We were only there for 2 days but between the 4 hockey games, we managed to go to the Anchor Bar, which claims to have created Buffalo Wings in 1964. I have to admit………these wings were AMAZING!!  We waited a little over an hour on a Friday night, but it was worth it. They had a small band there playing while we engulfed our huge tray of wings. Visiting the Anchor Bar is a MUST when visiting Buffalo.

Finally before we headed home, we drove to Niagara Falls to check out the view! It is an amazing experience. We got to explore more on the Canadian side a few months later…………….(part 2 coming soon!!) 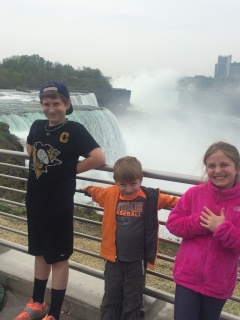